Meet Strong Jewel, Philly’s indie scene ambassador. Not only is she an artist, CEO, host, and entrepreneur but she is also the host to the longstanding show Iron Thron Radio. Jewel caters to and celebrates indie and major artists domestically and internationally. Whether you are an artist or hold another profession in entertainment or music, Jewel will highlight your career with all due shine. Past guests include Special Ed, Arrested Development, and other music icons…you never know who might pop up on Iron Throne Radio. 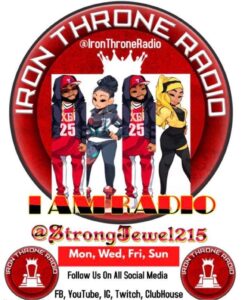 Iron Throne Radio airs Monday, Wednesday, and Sundays from 8:30-10:30 pm Est and on Friday nights from 10:30 pm -12 am est. The show also broadcasts on HeatMix 96FM and on YouTube, Twitch, Facebook, Instagram, and Clubhouse. If you’re an independent artist, entrepreneur, or making power moves in the music and entertainment industry reach out to Strong Jewel for your exclusive interview and to submit music for possible rotation. 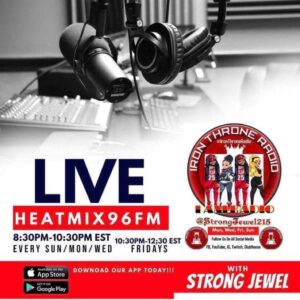 Connect with Strong Jewel and Iron Throne Radio at IronThroneRadio@gmail.com.

Strong Jewel established Iron Throne Radio back in December 2017, and just celebrated her fourth year Anniversary. The dream, goal, and manifestation were to give back as much as possible to others and for it to become a dominant successful, powerful, popular force/platform within the Independent / Entertainment Industry Community which it has achieved and continues to expand rapidly.

She became a major pioneer in the online Indie Music Scene / Review Community after innovating the priority play, (skip the line hustle) EST 2017 which has transcended virally. She also became unique in her approach ensuring that Iron Throne Radio not only spotlighted Independent  Artists but also other Independent Artist’s Platforms and Independent Businesses & Entertainment, having a very profound effect on raising their support networks/fan bases, opportunities.

This has continued to fulfill her dream and vision which was to organically grow, unite and unify others and expand their horizons as well as give them a solid platform to showcase their abilities, giving everyone a voice.